Art Residence Report/Bucos Catalina/August 2019
The occasion to spend one month in Krems, in the AIR Niederösterreich program was
excellent. Not only did It offer me the opportunity to research, develop artistic my projects
and concepts, but also it was a good time to get to know other artists in residence’s practices
as well as to discover Lower Austria art institutions. During my month I had also the opportunity
to bike, swim, run around Krems, which was very special and beneficial to my
body and subsequently my practice.

I have visited many exhibitions, installations, in Krems and Vienna, had nice talks with the
curator Andreas Hoffer, but also with Johan Simonsen and David Komray had common
dinners with other artists in residence, all of them influenced my works which I developed in
Krems.

The location of the residence place is from my point of view an advantage and disadvantage
of the program. From one side, the city is really small, and is hard to find a subject/theme to
work with, from another side, it is great to work on one one’s artistic practices and concepts,
which I took advantage of. Other than that, I liked the exhibition spaces, the organized trips
by air - visiting Austellungshaus Spoerri was really a special occasion, especially because we
could meet and talk to the artist personally. Susane Wenger foundation was also a nice
discovery, last but not least the guided tour through Kunsthalle Krems gave me a lot of
insights on the way the exhibition was created, which I liked.

I worked on several projects, some that emerged while being there - Running Line
intervention, News Gifizer (working name), and some that I was already developing before
coming to Krems - rehearsing for the play Die Abschaffung der Familie by Nicoleta Esinencu,
contributing to organizing exhibition Taxonomy Moldova by Volker Kreidler and Tanja
Sokolnykova, and a group installation and project RE:PUBLIC.

Running Text intervention/Krems/August 2019
Running text is a public intervention, located in between the Danube river and a forest, in
Krems. While normally a running text would be called a rotating text screened on a LED
display, used for sale announcements, cutdown timers or competition results, the
intervention is a text printed on the running path. The text consists of two phrases, inspired
by pop music "We are not the champions. We are not the world."

Sport is a part of our pop culture and generally a practice thought to improve our health and
wellbeing. Some might argue that sport is an appendix of our work routine, a practice that
people use to compensate for poor healthcare system, and a practice that involves a
mechanical approach to body training, and which resembles the capitalist need of being the
first, the best, the strongest.

The intervention invites runners and bikers to reflect their practice, be closer to nature and
question sport, and it's implication in a contemporary world, which intertwines with many
layers of the contemporary living and lifestyle. The site of the installation, between a small
forest and Danube river, was chosen intentionally, to point out the need of reevaluating the
relationship between human and nature.

The algorithm is a digital media mapping system. It crawls most popular articles and news,
transforms their headlines, word by word, into GIF conglomerates and maps the outcome in
multiple windows on the website. The map renews daily.

The purpose of the algorithm is to transform popular media headline's words into GeoCities
Archive GIFs - a collection GIFs from the web hosting service websites that was used
between 1994-2009. It selects, deconstructs and encodes the popularity based news search
results, one of the main components of the current search engines algorithms, into a random
visual system, dictated by the user input (the resulted GIFS are resulted from the description
in the GIF metadata ) from a digital era that we have overcome - an era where search engine
optimization and user experience design was not the main concern of site creators.
News Gifizer website prototype
The work argues the epistemology of current mass information outlets, the phenomena of
knowledge distribution and hegemony, and the search engines algorithms that facilitate
media eurocentrism, racism, classism and others.

The work invites its users to dive in the nostalgia of the eccentric and colorful websites of the
90s - a period when world wide web just have started to be more accessible to people and
was generally perceived optimistically, but also review and question it as a period when its
capitalist structures - a snowball of the privilege of the big and authoritative just started to
roll, intercalating and enhancing a current advanced post truth and post privacy era. 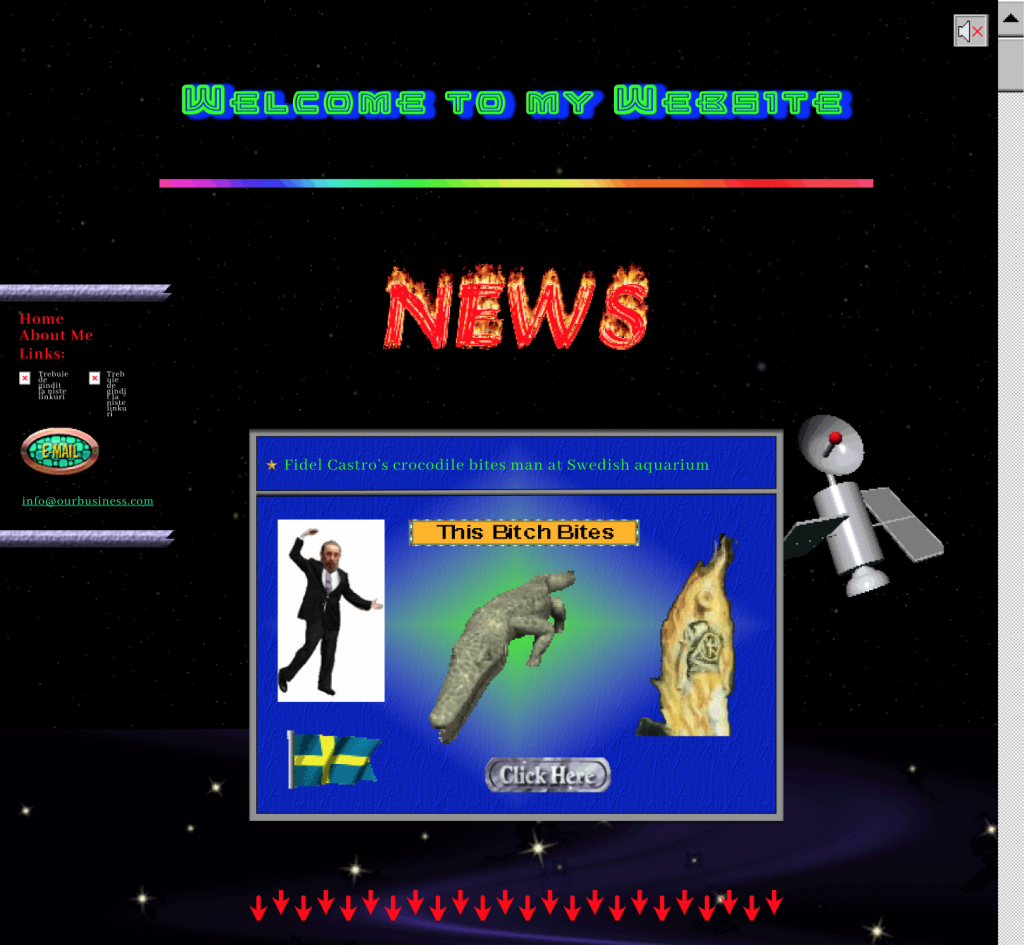